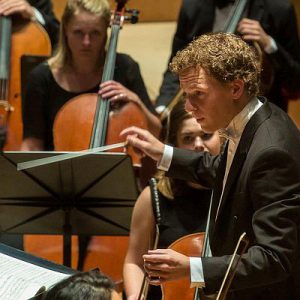 Pim Cuijpers studied orchestral conducting at the Conservatorium van Amsterdam (CvA) under the guidance of Ed Spanjaard and Lucas Vis. Pim’s fascination for conducting stems from his youth, when he was a violinist in multiple (youth) orchestras.

Pim followed masterclasses in the Netherlands and abroad led by conductors such as Kenneth Montgomery, Rodolfo Saglimbeni, Robert Houlihan and Howard Williams.

In 2019 Pim was assistant at productions from the Nationale Reisopera in Enschede and Opera Zuid in Maastricht. It was also the year of his debut with the Orkest van het Oosten in a series of children’s concerts.

At the moment Pim is the chief conductor of student orchestra CMC in Nijmegen. In addition he conducts various projects, ranging from chamber music to the big symphonic repertoire. In collaboration with the classical voice department of the CvA he led a fully staged production of Suor Angelica, Puccini.

In 2013, he founded his own orchestra: the Netherlands Symphony Project. This project orchestra, which mainly consists of conservatoire students, has its annual tour around the Netherlands in August. Pim worked with many soloists, including Gregor Horsch, Lidy Blijdorp, Anastasia Feruleva, Thomas Beijer and Floris Mijnders.

We use cookies on our website to give you the most relevant experience by remembering your preferences and repeat visits. By clicking “Accept All”, you consent to the use of ALL the cookies. However, you may visit "Cookie Settings" to provide a controlled consent.
Cookie Settings
Manage consent

This website uses cookies to improve your experience while you navigate through the website. Out of these, the cookies that are categorized as necessary are stored on your browser as they are essential for the working of basic functionalities of the website. We also use third-party cookies that help us analyze and understand how you use this website. These cookies will be stored in your browser only with your consent. You also have the option to opt-out of these cookies. But opting out of some of these cookies may affect your browsing experience.
SAVE & ACCEPT